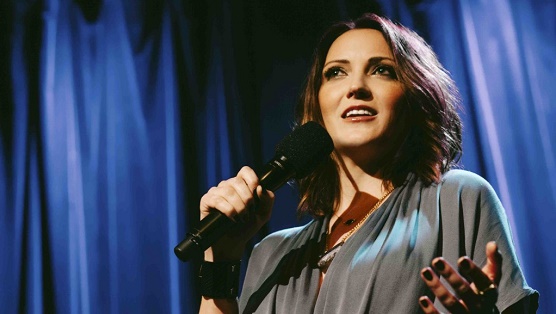 Women have long been criticized and labeled as “not funny” by the men of the comedy world. This claim is no longer credible nor is the validity of a female comedian up for debate any longer. Women often offer smarter and fresher takes on the standard humor that we are used to. Jen Kirkman is no newbie to the life of stand-up comedy for a woman. She has broken barriers and proven time and time again that women are truly hilarious.

Jen Kirkman is a stand-up comedian and a New York Times Bestselling Author.  Her first book, “I Can Barely Take Care of Myself (Tales of a Happy Life Without Kids)” hit shelves in April 2013 and was an instant bestseller.  Her follow-up book “I Know What I’m Doing & Other Lies I Tell Myself (Dispatches From a Life Under Construction) debuted on April 12th, 2016. Her weekly podcast, “I Seem Fun: The Diary of Jen Kirkman”, is often in the top 100 in comedy on iTunes.  Jen tours the world as a stand-up but lives in Los Angeles.

In Kirkman’s podcast, entitled “I Seem Fun: The Diary of Jen Kirkman,” Kirkman hilariously discusses whatever is going on in her brain at the given time. Unlike most podcasts, Kirkman doesn’t need anyone else to riff off for laughs. She does the podcast solo, simply spewing her “unfiltered thoughts” on everything from her personal life to the happenings in the world.

In the video below, Kirkman joins Jenni Konner of 92Y to discuss her Netflix Original Comedy Special, “I’m Gonna Die Alone (And I Feel Fine). The show is now streaming worldwide and was named one of the top ten stand-up specials of 2015 by The Atlantic and Time Out New York. The New York Times said, “Though delivered in an effortless conversational style, her comedy has the meticulous detail that can come only from repetition and experience.”

For further related speakers on topics by influential women, check out our Top Female Speakers lists!

Our #AAEBookClub selection for February is Claire

In this video, Karen Mangia discusses her book "Wo

Our #AAEBookClub selection for December is Karen M

In our #AAEBookClub pick for November, "Inclusive

Our #AAEBookClub book for November is Mary-Frances

In this video, Lauren McGoodwin, the author of Oct

Tips for Making Your Virtual Event a Glitch Free Success